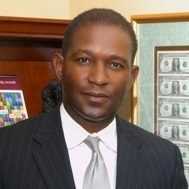 Calvin H. Elam, CLU, ChFC, a native South Carolinian, began his career in the wealth management and insurance industries in 1992 after spending five years as a successful commercial and retail lender with Bank of America, (formerly Nations Bank). He is a graduate of the University of South Carolina’s Darla Moore School of Business in Columbia, SC, where he earned a Bachelor of Science degree in Marketing.

Calvin is a Registered Principal with LPL Financial and holds FINRA securities registrations 7, 63 and 24 with LPL Financial. He is currently registered to provide investment services in SC, NC, GA, TX, MD, MS and MA. In addition, he is licensed to market life insurance through the SC Department of Insurance and has achieved Chartered Financial Consultant (ChFC) and Chartered Life Underwriter (CLU) designee status from the American College in Bryn Mawr, PA.

Calvin truly believes that community service is the "price you pay to live in a community". He has served or currently serves on Board of Trustees of Claflin University, Palmetto Health and Palmetto Health Richland, Central Midlands Council of Governments, SC Children's Trust Fund, Big Brothers and Big Sisters of Greater Columbia Inc., Alston Wilkes Society, USC Partnership Board of Business Advisors, the former First National Bank of SC and the Greater Columbia Chamber of  Commerce.  In 2013, he was recognized in the US Black Engineers and Information Technology magazine as one of the Top Blacks in the Military, in 2013 he was also named Distinguished Hospital Trustee of the Year by the SC Hospital Association, in 2012 he was awarded the Whitney M. Young Leadership Award by the Indian Water Council of the Boy Scouts of America, in 2011 he and his wife were recognized for outstanding community service by the March of Dimes and in 2000 he was selected byThe State newspaper in Columbia, SC as a future business leader.

He is also author of the book, " Self Reliance- What Do You Mean You Didn't Know" which is available on Amazon.com

Calvin and his family are members of Brookland Baptist Church in West Columbia, SC, where he serves on the Board of Trustees. He and Mary have three children.